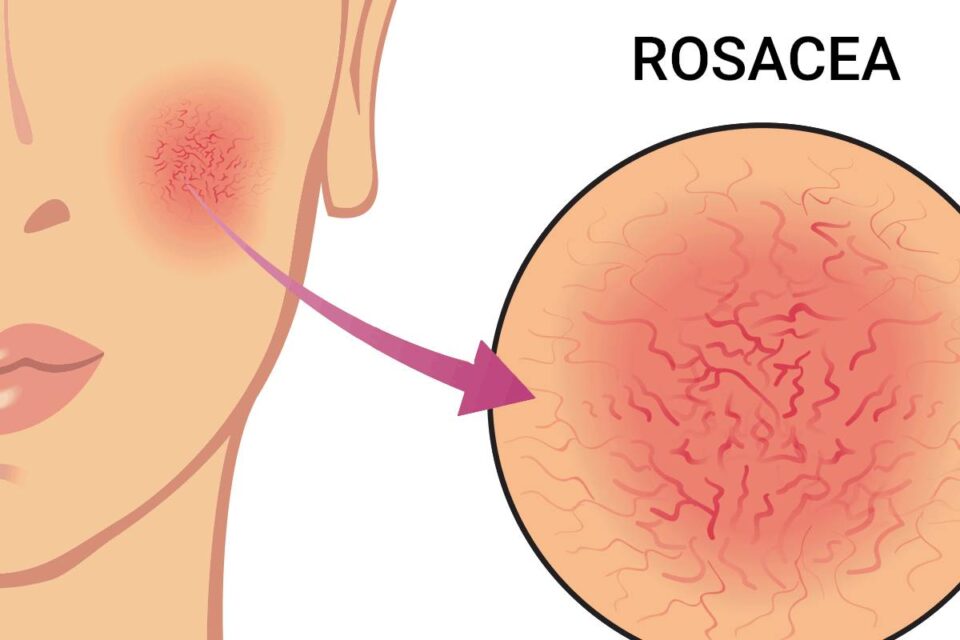 Rosacea is an inflammatory facial disorder that causes a skin rash, couperose, telangiectasia, a burning sensation, pimples, and bumps on the skin of the cheekbones, nose, chin, and forehead.

It is a chronic pathology that appears more frequently in middle-aged people and to varying degrees.

What symptoms does it Present?

Rosacea is a pathology with multiple symptoms: frequent redness of the face, burning or slight swelling, persistent redness together with the appearance of pimples on the skin, even with pus.

Also, thin reddish lines under the skin due to enlarged blood vessels under the skin. In addition, they can affect other parts of the face such as eyes, eyelids or nose with their inflammation.

The skin harder than usual on the forehead, chin, cheeks, or other areas is also a symptom of rosacea.

Rosacea causes or why it Occurs

The cause that causes rosacea is unknown, but different factors promote its development or worsen it, such as skin type, genetic inheritance, hormonal changes, diet, sudden changes in temperature, sun exposure, wind, stress, or some medications.

Can it be Prevented?

Rosacea is not a disease that stands prevented. Or the level of affectation reduced.

The main action is to identify the triggers to avoid them: start early treatment, maintain good skin hydration, avoid products that irritate the skin, use creams that protect from the sun’s rays, use makeup appropriate to our skin type and use shampoos. And gels that are not very aggressive to avoid further irritation.

What is Rosacea due to

The causes that originate it are not entirely clear. A particular genetic predisposition leads to greater reactivity of the blood vessels, and environmental factors also influence, such as chronic sun damage or the use of topical corticosteroids continuously. In addition, the Demodex mite present on the skin can cause an exaggerated inflammatory reaction, also contributing to the appearance of rosacea.

Who is Affected by Rosacea

The rosacea can occur at any age but most common among adults aged 30 to 50 years. It is also more common in women and people with fair skin or low phototypes (I and II). On the other hand, a third of patients with rosacea have a family history.

IT is challenging to estimate the total affected population, but it usually affects one in ten people. This pathology is more common in people from northern or eastern Europe.

What does your Treatment Consist of?

The treatment of rosacea includes several general measures to avoid triggers. Cold, sudden temperature changes, excessive heat, corticosteroids, alcohol, among others. In addition, it is advisable to use sunscreen daily and use specific hygiene and moisturizing cosmetics that include vasoconstrictor substances that reduce vascular reactivity.

Rosacea treatment should stand selected based on its clinical form and severity. In many cases, to obtain the best results. A combination of different treatments will be necessary: ​​topical, oral, light sources or surgical.

In cases, topical treatments are used that include antibiotics such as metronidazole, azelaic acid, permethrin, or ivermectin. For example more persistent cases, systemic therapies such as tetracyclines, metronidazole or isotretinoin can remain used.

The therapies with light as pulsed dye laser have shown a significant reduction of erythema, flushing and telangiectasia. Surgical procedures can remain used in adenomatous rosacea cases, such as electrosurgery and ablative lasers such as the CO2 laser.

How to Glow Up in a Week